Networking is to interact with other people to exchange information and develop contacts. When done well, networking can further one’s career or professional development. It leads to more job and business opportunities, broader and deeper knowledge, and faster advancement.

Networking is not something you do one time when you need something. That behavior is called exploitative… Networking is an on-going activity. It is the cultivation of productive relationships that grow over time. Think of it as Friendworking when the people you connect with become more than just a name or a position. These connections are more than just a node in a professional network, they represent people you can comfortably call-up and ask for help. 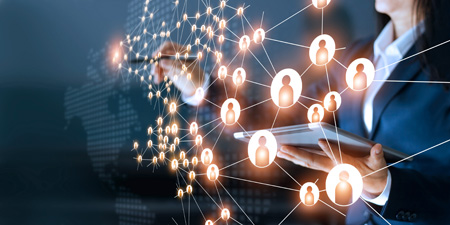 To cultivate relationships, it starts with Giving

Networking works best when the mindset is geared towards giving and not taking. Don’t think for a second that because you’re currently looking for a job and need help that you’re not in the position of giving. We all are in a position to bring something to the table. Think beyond the obvious. You can find many ways to give such as gratitude, recognition, enhanced reputation as described in the book: “Influence without Authority” by A. Cohen and D. Bradford.

Another way to think about networking is to “pay it forward”. The concept of doing something good for someone in response to a good deed done on your behalf. However, you don’t repay the person who did something nice for you. Instead, you do something nice for someone else.
Pay it forward should be done with a selfless spirit. This means that one person helps another without hoping for repayment or good deeds in return.

The ultimate goal is to embrace networking as an on-going activity embedded into your weekly schedule. It is not an ad hoc activity that pops-up when you’re in need. It is fully integrated in your life style. When people focus on the collective benefits of making connections such as support my company or help my customers, networking is more authentic and not self-promoting. Networking is a necessity and should be a priority in your professional life because it improves the quality of work and increases job satisfaction.